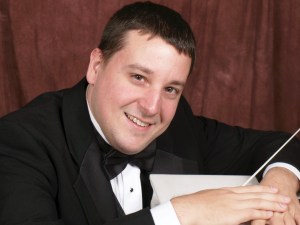 William H. Reed has his MFA from Bard College (in Orchestral Conducting) and his BM from Oklahoma City University (in Musical Theatre & Violin Performance). He has also done post graduate study at Hardin-Simmons University (in both orchestral and choral conducting). His main conducting teachers have been: Dr. Wayne Dorothy and Harold Farberman. Before receiving his university degrees, he was chosen, three years in a row, to be one of the 500 students (in the state of Texas) who received the Outstanding Performers Award at the Texas UIL Solo & Ensemble State Competition to receive this award as a solo vocalist.  He was also chosen to be a member of the Texas All-State Mixed Choir three years and the Texas All-State Symphony Orchestra one year.  In addition to that, he was awarded Second Place in the Texoma NATS (National Association of Teachers of Singing, Inc.) Vocal Competition as a high school student and then again as a university student (while attending Oklahoma City University).  He has played the violin since the age of three and has been in Master Classes (on the violin) with world renowned pedagogues: Dorothy Delay, Stephan Clapp, and Brian Lewis. He has also sung and acted in Master Courses under the world renowned Broadway star: Betty Lynn Buckley after being invited (personally…by her) to perform alongside her on one of her Christmas shows at the WaterTower Theatre in Addison, TX. In addition to this, he has guest conducted many professional and non professional orchestras around the world (in concert).  These include: the London Classical Soloists on several occasions (London, England, UK), the Janacek Philharmonic Orchestra (Ostrava, Czech Republic), the Moravian Philharmonic Orchestra, the Duna (Danube) Symphony Orchestra, the Parnu City Orchestra, the Estonian National Youth Symphony Orchesta, the State Philharmonic of Kosice (Kosice, Slovakia) in two performances and two Puccini operas (Tosca and La Boheme) with the Opera and Philharmonic Society of Bourgas (Bourgas, Bulgaria). He has been educated, in either a Master Class and/or workshop setting, by many world renowned conducting pedagogues. Among these have been such notable teachers/conductors as: Neeme Jarvi, Paavo Jarvi, Leonid Grin, Colin Metters, Achim Holub, Gustav Meier, Jorma Panula, Otto-Werner Mueller, Larry Rachliffe, Neil Varon, Carl St. Clair, Donald Thulean, David Effron, Neal Stulberg, David Loebel, Daniel Lewis, Dr. Leonid Korchmar, Dr. Oleg Proskurnya., John Farrer, Marin Alsop, Rossen Milanov, András Deák, Alim Shakh, Raymond Harvey, Adrian Gnam, Dr. Gregory Pritchard, Apo Hsu, etc. He was selected to be the Second Prize Winner of the London Classical Soloists’ Summer of 2015 Conducting Competition in London, England (UK) and he was also selected to be the Third Prize and Special Prize Winner of the Twelfth Danube International Conducting Competition of 2016 in Budapest, Hungary.   Currently, he resides in Arlington, TX and has lived there since August of 2010. In Arlington, he taught for Arlington ISD as an Orchestra Director/Teacher at four Title I elementary schools. Before this, he resided in El Paso, TX where he taught for Ysleta ISD as an Orchestra Director/Teacher at three Title I elementary schools and also held the position of Staff Conductor for the El Paso Youth Symphony Orchestras. Previous to these posts, Mr. Reed was the Conductor of the Southeast Texas Youth Symphony Orchestra and taught orchestra, choir, and general music classes at Westbrook High School in Beaumont, TX.