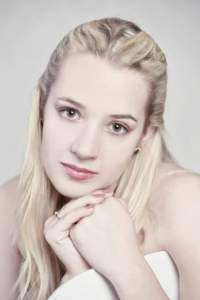 Verity Jo Spencer Hall, 21 years old, was born in Barnstaple, North Devon, England in 1997. In 2002, her moved to Spain where she undertook her education in the excellent Spanish State system. She was a studious pupil and finished with the ESO education with Music, Science, Art and History.

On her 17th Birthday she was surprised with a trip to London where, for the first time, she was taken to see the musical ‘Wicked’.  She was ‘spell-bound’ with her very first experience at the theatre – the production, the staging and the performance inspired her to dream of becoming a performer.

Back in Spain, she immersed herself into music and theatre and through hard work and dedication, in 2015  was delighted to have secured the lead role of ‘Laurey’ in a production of Rodgers and Hammerstein’s ‘Oklahoma!’.

Following the success in ‘Oklahoma!’ she went on to appear in other productions such as Fiddler on the Roof where she played the role of ‘Hodel’ and was soon to star in her own solo concerts where she had a mix of musical theatre and opera arias to full playing audiences. She soon came to the notice of the vocal coach, Nigel Hopkins, who asked her to join his three very successful choirs. She became his lead soprano and soloist in many concerts such as Vivaldi’s Gloria, the John Rutter Requiem, Handel’s Messiah, Carl Jenkins’s Armed Man etc. In July 2018, she was honored to have the opportunity to represent England at the LLangollen International Musical Eisteddfod where she became a semifinalist. She has since been asked to perform regularly as a  soloist with the Mediterranean Symphony Orchestra.

When she gets the opportunity to sing these classical pieces, she says: “it gives me a feeling inside that is hard to put into words. I am never happier than when I am totally consumed with a story told in an operatic setting.”

Being fluent in the Spanish language helps with her Italian opera studies, and to be making her international opera debut as Zerlina in Mozart’s Don Giovanni at the Mediterranean Opera Studio and Festival is extremely exciting and a huge step towards the professional opera career she desires.