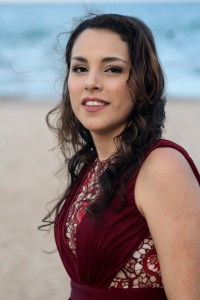 Valeria Rodríguez, soprano, is a native of Buenos Aires, Argentina. This season, she will sing Countess in Le nozze di Figaro and Kate Pinkerton in Madame Butterfly for the Mediterranean Opera Studio and Festival in Sicily. She will also sing Magda de Civry in La Rondine with Varna International Opera Academy in Bulgaria.

Last summer, Ms. Rodriguez sang Countess in Le Nozze di Figaro and Second Lady in Die Zauberflöte with Manhattan Opera Studio. She was also a soloist in a Carnegie Hall concert with MOS.

Ms. Rodriguez has participated in “The Naked Voice Institute” at the Bienen School of Music, Northwestern University, Chicago, Illinois in 2016 and 2017. There she studied with W. Stephen Smith and Gene B. Roberts, and performed selections from Manon and La Traviata in the closing gala concert at Mary B. Galvin Hall.

A current voice student of W. Stephen Smith, Ms. Rodriguez has coached with Carol Mannen Smith, Ken Smith, Damian Roger, Susana Cardonnet and G. A. Ópitz. She is a 2013 graduate of the University of the Arts, U.N.A. in Buenos Aires major in Voice where she studied with Professor Eduardo Cogorno, specialist in Spanish music.