Leonardo Catalanotto was born in Caracas.

His work in Opera began in 1993 as Substitute Maestro and Assistant Conductor at the Teatro Massimo “V. Bellini” of Catania. He has since been invited many times to the theaters such as the “Massimo” of Palermo, “Rossini Opera Festival” of Pesaro and by theaters in Düsseldorf, Lisbon, Sevilla and Geneve.

He earned his diploma in Orchestra Conducting at the Accademia Musicale Pescarese under the guidance of Donato Renzetti.

In addition to conducting numerous symphonic concerts, he has been the Cembalo Director for the productions of La Serva Padrona by Paisiello and Il Giocatore by Cherubini.

He has been the assistant to Jesùs Lòpez Cobos at the “Real” of Madrid for Macbeth.

He is regularly invited to China at the Conservatory of Music of Shenyang and in Japan in Sapporo, Shizuoka, Osaka, and Tokyo to give lessons on Italian Opera repertoire designed for lyric singers.

He has worked at the National Center of the Performing Arts of Beijing (China) as a Singing Coach for Rigoletto, L’Elisir d’amore, Le Nozze di Figaro and Norma. He has been assistant to Lorin Maazel for Il Barbiere di Siviglia and to Myung-Whun Chung for Simon Boccanegra. 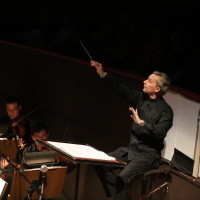