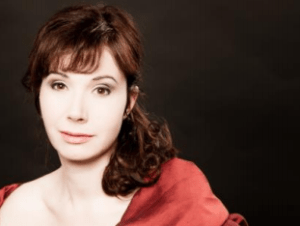 Sophia Damaris studied Solo Singing at the Conservatorium, Vienna, and graduated with a “Diplom” in Opera from the “Opernschule des Konservatoriums, Wien.” She completed both studies with Distinction. The German born soprano had shown promise from a very young age when she won the “Jugend Musiziert” competition in Mainz. During her studies in Vienna she participated in many more competitions, competing as a finalist in the international singing competitions of “Klassikmania,” “Leo Slezak” and “Vincenzo Bellini”, as well as the International Operetta Competition “Nico Dostal.” While at the Conservatorium she sang in Master Classes with Mirella Freni, Montserrat Caballé, Barbara Bonney and Giacomo Aragall. At the Conservatorium Vienna she performed the roles of Donna Anna from Mozart’s “Don Giovanni”, and Antonia from Offenbach’s “Les Comtes D’Hoffmann.” She sang many more times with the “Orchester des Konservatorium Wien”: at the Theater Akzent, she performed the roles of Marie from Smetana’s “Verkaute Braut”, Gretel from Humperdinck’s “Hänsel und Gretel,” Prinzessin from Ravel’s “L’enfant et les sortilèges,” Miss Wordsworth from Britten’s “Albert Herring,” and Mimì from Puccini’s “La Bohème.” At the State Theater St. Pölten she sang Erste Dame from Mozart’s “Die Zauberföte”, and at the State Theater Baden she sang Pamina also from Mozart’s “Die Zauberflöte.” Later with the Pro Arte Orchestra Vienna, Sophia Damaris sang Liù from Puccini’s “Turandot,” Lisa from Lehàr’s “Land des Lächelns,” Micaela from Bizet’s “Carmen,” and for the second time, Mimì from Puccini’s “La Bohème” and Marie from Smetana’s “Verkaufte Braut,” Outside her Conservatorium studies Sophia Damaris performed Atalanta from Händel’s “Xerxes” with the “Orchester der Opera Piccola”. She performed the Soprano Solos in Mozart’s Requiem and Haydn’s Requiem with the Musikverein Wien, as well as the Soprano Solos in Mendelssohn’s “2. Symphonie” (Lobgesang) with the “Universitätsorchester, Wien.” With the “Münchner Symphonikern” she performed Gräfin Ceprano from Verdi’s “Rigoletto” and Anna from Verdi’s “Nabucco,” at the “Opernfestival Gut Immling.” In 2017 and 2018 Sophia Damaris has often travelled to Italy, singing the Soprano Solo in Beethoven’s Missa Solemnis with the Haydn Orchester at the Dom von Trient and Ciesca from Puccini’s “Gianni Schicchi” at Teatro Lucca and Cio Cio San from Puccini’s “Madama Butterfly“ at the Mediterrean Opera Festival. Recently she sang the Seven early Songs by Alban Berg at the Lukaskirche Dresden with the Orchestra of University Dresden.