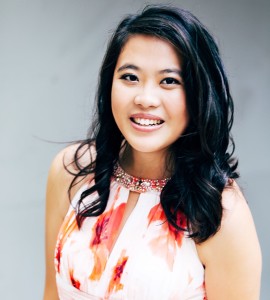 Twenty-five year old violinist Natalie Yu has appeared numerous times on the concert stage.  Ms. Yu made her solo debut with the Oregon Symphony at the age of 11 and has also appeared as soloist with the Vancouver Symphony, the Brentwood-Westwood Symphony Orchestra, Portland Youth Philharmonic, and the Clark College Orchestra in Vancouver, Washington.  Most notable performances include the performance of the Tchaikovsky Violin Concerto with members of the Oregon Symphony and Oregon Ballet Theater in Arlene Schnitzer Concert Hall in Portland Oregon, the Vivaldi Four Seasons with the Oregon Symphony, and most recently the Sibelius Violin Concerto with the Brentwood-Westwood Symphony as the grand prize winner of their Young Artist Competition.  She was the winner of the 2017 Petri Scholarship Competition, where she was awarded $15,000 to further her musical career.

Recent career highlights include playing principle second violin in Spoleto Festival USA’s production of Tchaikovsky’s Eugene Onegin, and playing under the batons of Gustavo Dudamel, Esa-Pekka Salonen and James Conlon at the Walt Disney Concert Hall as a member of the Colburn Orchestra.  Ms. Yu has served in leadership positions of the American Youth Symphony, the Spoleto Festival Orchestra, the Colburn Orchestra, Young Artists Symphony Orchestra, Portland Youth Philharmonic and the Young Musician Foundation’s Debut Orchestra.  As a full scholarship recipient, she was invited to participate in the National Symphony Orchestra’s Summer Music Institute at the Kennedy Center during the summer of 2008 and has also attended the Aspen Music Festival, Music Academy of the West in Santa Barbara, California, Bowdoin International Music Festival in Brunswick, Maine, and the Heifetz International Music Institute in Staunton, Virginia.

Ms. Yu has participated in master classes with violinists Midori Goto, Ida Kavafian, William Preucil, Leila Josefowitz, Stephen Clapp, Daniel Phillips, Itzhak Rashkovsky, Mikhail Kopelman, Renee Jolles, and Ani Snarch.  Ms. Yu obtained her Bachelors of Music and Artist Diploma in violin performance from the Colburn Conservatory of Music, where she studied with Robert Lipsett. She is currently pursuing a Masters of Music in Violin Performance at Rice University, where she studies with Kathleen Winkler.