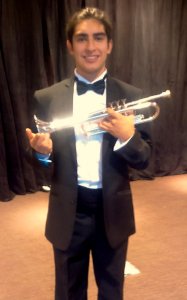 Matías began his musical studies at the age of 10 at the Music School of La Serena, Chile.

Matías is a graduate of the `superior institute of arts of the  Teatro Colón“Buenos Aires , Argentina.

He has collaborated with orchestras such as the University of Concepción (Chile), stable orchestra of the Argentine theater of La Plata( Argentina ), Philharmonic Orchestra of Río Negro (Argentina), Patagonia Symphony Orchestra (Argentina).

In 2017 he has been selected to be part of the YOA “ Orchestra of the Americas“.

Since October 2017 he has been a student at the ” Academia Brass Alicante ” where he studies with Maestro Rudi Korp.