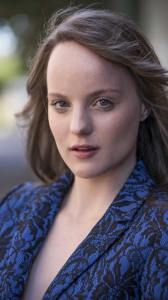 Adelaide born Marie Campbell completed her Bachelor of Music at the Sydney Conservatorium of Music, where she was a double scholarship recipient working with German dramatic soprano, Anke Höppner. Most recently, Marie made her international operatic debut as Cherubino (Mozart’s “Le Nozze de Figaro”) and Suzuki (Puccini’s “Madama Butterfly”) as part of the Mediterranean Opera Studio and Festival in Sicily, Italy.

During her undergraduate degree, in 2016 she performed in the chorus of Offenbach’s “Orpheus in the Underworld” (Rockdale Opera Company), Smetana’s “The Bartered Bride” (Rockdale Opera Company) and Bellini’s “La Sonnambula” (Operantics). In the same year, Marie also made her principal debut as Older Ellie in Frederick Hill’s Australian Folk Opera “The Water Babies” (Independent).

After graduating in 2017 Marie returned to her home state for a three month regional tour of Tchaikovsky’s “Eugene Onegin” (Co-Opera). In the same year, she performed as a featured ballet dancer and chorus member in Strauss’ “Die Fledermaus” (Operantics), and the role of Tessa in Gilbert and Sullivan’s “The Gondoliers” (Rockdale Opera Company). She also made her Carmen debut in original language to high acclaim and sold out audiences in October in Port Adelaide (Elephant in the Room Productions).

Since relocating to Adelaide, Australia earlier this year, Marie has been Assistant Directing Rossini’s “The Barber of Seville” (Co-Opera) under the watchful eye of Tessa Bremner OAM. She made her Fringe Festival debut in Sean O’Boyle’s children’s opera “Space Encounters” (Emma Knights Productions), and made her Adelaide Festival debut in the stage chorus for the Helpmann award winning production of Brett Dean’s “Hamlet” (State Opera South Australia/Glyndebourne). Later this year, in September/October Marie will be understudying the role of Amneris (Verdi “Aida”) for a 5 week tour of China with the Australian International Opera Company. When she returns to Adelaide, Marie will perform the role of Suzuki in Puccini’s “Madama Butterfly” (Elephant in the Room Productions).