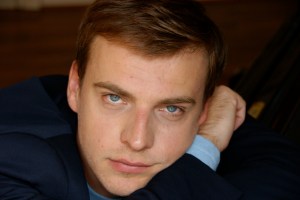 Marek Ruszczynski has given recitals across Europe in concert halls including the Wigmore Hall, Barbican, Berlin Philharmonie and the Musikverein. He has worked and performed under the tutelage of Marilyn Horne in the programme The Song Continues both in Carnegie Hall in New York and at the Opéra de Bastille in Paris.

Marek was very lucky to grow up in the fascinating era when communism was declining and cultural influences from the ‘passionate’ East and ‘enlightened’ West were confronting one another. He received his formative musical education from Prof. Katarzyna Popowa-Zydron, in Gdansk, Poland and at 19 he was awarded a prize from the Polish Ministry of Culture and Education for Musical Achievement, and a Gdansk and Brussels Rotary Club Prize for the Best Conservatorium Graduate in Northern Poland. He came to London a year later.
Driven by a passion for vocal music, Marek acquired the skills of supporting opera singers,     learning the craft from a number of distinguished artists including Dame Kiri Te Kanawa, Christa Ludwig and Dietrich Fischer-Dieskau. During his studies at the Guildhall School of Music and Drama he was awarded the Gold Medal Accompanist Prize in both 2009 and 2011. Further     success followed when he won the Prix de Piano in the Nadia and Lili Boulanger International Voice-Piano Competition 2012 in Paris. Marek is a Samling Artist, a Britten-Pears Young Artist, and an alumnus of Academie Musicale de Villecroze where has been now working as an accompanist for Teresa Berganza.
He has held a position of a vocal coach at both the Royal Irish Academy of Music and the Guildhall School of Music and Drama. Supported by the Opera Awards Foundation he trained as repetiteur at the National Opera Studio in London. In 2015 he worked as the language coach for the production of King Roger for the Royal Opera House in London under the baton of Sir Antonio Pappano.
Currently he is a member of the music staff at the Jette Parker Young Artists Programme of the Royal Opera House, Covent Garden and he works as a vocal coach at the Royal Academy of Music and for the Kiri Te Kanawa Foundation. Marek has given masterclasses at the Trinity College of Music in London and the University of California, Santa Barbara. As a freelancer he also works as a recitalist in Europe and the United States and sits in a jury of the Manhattan Voice Competition. Beauty of tone, visceral empathy with musical emotion and passion are the hallmarks of his performances.