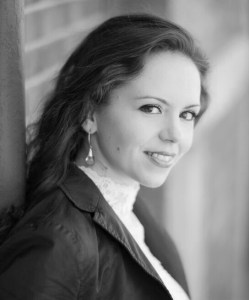 French-Italian pianist Laetitia Ruccolo is leading a successful international career as a concert pianist, an accompanist, as well as a vocal and diction coach. She is fluent in French, Italian, German, English and Spanish.

After being the original music director of the highly acclaimed company Loft Opera in Brooklyn, she cofounded the company Bare Opera, in Manhattan, which proposes inventive and modern productions, as well as master classes for Resident Artists with Metropolitan Opera conductors like Fabio Luisi or Riccardo Frizza. She has been invited by the National Opera Studio in London, to be part of the 2015/2016 season, as a répétiteur, where she participated to a residency at the Royal Opera House, Welsh National Opera and Opera North.

Since her debut in Salle Gaveau in Paris, she has performed widely as a solo artist, as well as collaborated with chamber ensembles, singers and with orchestra in France, United Kingdom, Italy, Spain, Germany, Austria, Portugal and Israel. In New York, she has performed at Carnegie Hall, Alice Tully Hall, Merkin Hall, Symphony Space, New York Historical Society, the Museum of the City of New York and at the Metropolitan Opera Guild.

Also passionate about art songs, she has played and performed at SongFest in California, and was invited twice at the Schubert Institute in Austria, where she worked with pianists such as Julius Drake, Helmut Deutsch, Rudolf Jansen, Michael McMahon, Roger Vignoles, Martin Katz and Graham Johnson, as well as singers Christa Ludwig, Robert Holl and Elly Hameling.

Collaborating with new composers has always been an important part of her career. Her impressive list of new composers collaborations consists of John Musto, Jake Heggie, Mohammed Fairouz, Christian Lauba, and Libby Larsen. She was a member of the Klezmer group ’12th Night Music’, coached by Grammy Award-nominee clarinetist, David Krakauer. .

She graduated from the Ecole Normale de Musique of Paris, the University Mozarteum in Salzburg, Austria, and Mannes College of Music in New York, where she got a full

scholarship. She also earned a degree in foreign languages from the University of Aix- Marseille, as well as a State Diploma in Music Pedagogy in Paris.