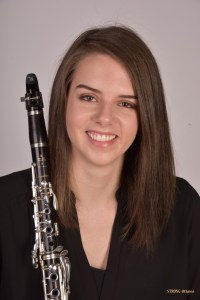 Before attending university, Kathryn played bass clarinet with the Calgary Wind Symphony in 2015. During this time, she completed a certificate from the Mt Royal Conservatory in chamber music at the associate level.  Ms Anderson will be graduating from the University of Ottawa with a Bachelor of Music in 2019, and will pursue graduate performance studies. She currently plays both Bb and bass clarinet in the University of Ottawa Wind Ensemble.

When not performing as a clarinetist, Kathryn works as a chorister with the Ottawa Choral Society and has performed in the Governor General Performing Arts Awards and under the baton of Grammy winner Duain Wolfe. Kathryn appeared as a member of the chorus in The University of Ottawa’s Die Zauberflote and sings in their chamber ensemble. She has performed on stages including the National Arts Centre under the direction of Alexander Shelley of Canada and the Isaac Stern Auditorium in Carnegie Hall