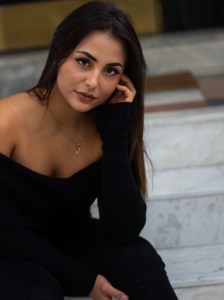 Justice Jones is a 21 year old stage director and soprano from Sydney, Australia.

As a young director Justice has recently been selected as one of seven creatives to take part in the prestigious National Institute of Dramatic Arts director’s program which will take her to Berlin in 2019 to assistant direct during the Theatertreffen Festival. She is also a part of the Young Vic director’s program in London’s West End. In the past, she has observed several Opera Australia productions including; La Traviata, La Boheme, Carmen, The Merry Widow and The Nose. In 2018 she broke into the European industry as assistant director under the leadership of Rosalba Lo Duca for Le Nozze Di Figaro as a part of the Mediterranean Opera Festival. Her upcoming plans for 2019 are two observerships with Opera Australia for Werther and Salome during the companies summer season at the Sydney Opera House, as well as an observership for Manon Lescaut with London based summer festival – Opera Holland Park. Her opera directing style is greatly influenced by her unique background in both classical voice and acting. Justice has worked professionally on Australian stages in musical theatre and Australian screens in various commercials, from a young age. She is well studied in Meisner Technique, having learnt from industry respected coaches at The Actors Door Studio in London and on a 100% scholarship at The Actors Pulse Sydney. She has also worked with The Australian Theatre for Young People and Sydney’s leading studio ScreenWise. As a young singer, Justice completed her undergraduate degree in classical voice at the Sydney Conservatorium of Music under the leadership of Dr Narelle Yeo in 2017. She has performed both as a young soloist and chorus member in Sydney’s most prestigious concert locations, including; The Sydney Opera House, Angel Place, Sydney Town Hall and The Domain. Upon graduating from her undergraduate degree she recently relocated to Europe where she has been studying and performing the roles and repertoire of Cherubino & Barbarina (Le nozze di Figaro), Urbain (Les Huguenots), Rosina (Il barbiere di Siviglia) and Oscar (Un ballo in maschera).

Her classical repertoire spans over 5 languages and covers works from the late 16th to 21st century. Her primary vocal coach is the internationally renowned Armenian soprano Arax Mansourian.