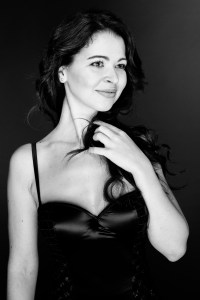 Slovenian soprano Jerica Steklasa was studying at the University of music and performing arts in Vienna under the tuition of prof. Claudia Visca, later also prof. Charles Spencer. She finished her Master studies in March 2019.

Following her invitation to Australia, Steklasa made her opera debut in Sydney, Australia as Pamina in Mozart’s Die Zauberflöte in 2013, followed by her debuts in Vienna as Susanna in Le Nozze di Figaro, Fiordiligi in Cosi fan tutte and Adele in Die Fledermaus. In the 2016/2017 season, she had her debut at the Stadttheater Baden in the leading soprano role of Marie in the operetta Der Carneval in Rom by Johann Strauss. After the successful production in Baden, she was invited to sing at the world-renowned New Year’s ball HOFBURG Silvesterball in Vienna, so she performed at this prestigious event on 31 December 2017.

She won many national and international awards – f.e. (the most recent) as winner of the “International singing competition Kammeroper Schloss Rheinsberg” she sang the role of Ännchen in Weber’s “Der Freischütz” at Summer Festival 2018 in Rheinsberg (Germany), and was awarded to perform at Operagala concerts in Rheinsberg and Landesvertrettung in Berlin. She was invited to perform there again – to sing the role of Silvia in Haydn’s “L’Isola Disbitata” at the Easter Festival of Kammeroper Schloss Rheinsberg in April 2019.