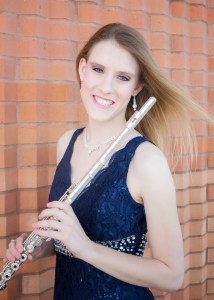 Jacquelyn Vaught is an American flute and piccolo performer who received her Bachelor of Music with a specialization in music education and obtained an all level K-12 teacher certification from Texas A&M University-Corpus Christi in Spring 2017. She was selected to perform in the National Flute Association’s Collegiate Flute Choir at the national convention for three years in a row in 2014, 2015, and 2016; only 18 collegiate flute players were selected nationally for this honor each year.  As a member of the CFC, she performed at the Washington D.C. convention, a performance which featured the group Project Trio, and at the San Diego convention, when Jim Walker and Jose Valentino were also featured.  During the summer of 2016, she studied abroad in Vienna, Austria in the IES Summer Music History and Performance Program.  Additionally, she was the winner of the 2015 Texas A&M University-Corpus Christi’s First Annual Concerto Competition in the Woodwind Category and has performed in masterclasses with Amy Porter, Leone Buyse, Ransom Wilson, and Marianne Gedigian. Jacquelyn currently maintains a private flute studio and gives private flute lessons to middle and high schoolers in Texas.  Her future plans include furthering her studies in Austria at the Vienna Conservatory, beginning in the Winter Semester of 2018, as a student in the Artist Diploma program.