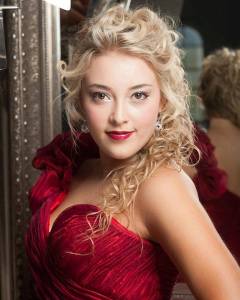 Imogen – Faith Malfitano recently completed her Masters in Music Studies (Opera Performance) at The Sydney Conservatorium of Music. Here, she was awarded multiple scholarships, including the prestigious ESTIVO program in Italy and an Internship with Opera Australia.

In 2016, Imogen performed the soprano solo in Mahler’s Symphony No. 2 (SCM), was a finalist in The Opera Foundation’s Lady Fairfax New York Scholarship, Joan Sutherland Memorial Award and reserve finalist in the Sydney Eisteddfod Opera Scholarship. She was also awarded an encouragement prize from the Bel Canto Foundation as well as the honour of singing in Maestro Richard Bonynge’s 2016 Masterclass.

Imogen continues to study Italian, and has participated in Masterclasses with a number of renowned coaches including Emma Matthews, Lella Cuberli, and Fabio Centanni. Last year, she was awarded Second Place in the Sydney Savage Club competition and the Gordon Aikin Memorial People’s Choice award. Imogen was also a finalist in the Sydney Eisteddfod Opera Scholarship, Fine Music Young Virtuosi Award and Semi-Finalist in the prestigious IFAC Handa, Australian Singing Competition, receiving the Instituto Italiano di Cultura prize. In 2018, Imogen is a Young Artist with Pacific Opera.