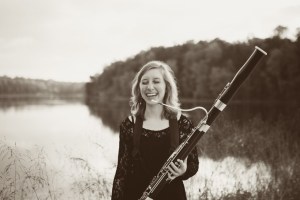 Ida Cawley is currently studying in Italy at La Scuola di Musica di Fiesole with Andrea Zucco.  She is completing the Corso di Perfezionamento for bassoon.  This course consists of eight or nine master classes held each month during the school year.

Before moving to Italy, Cawley was active as a performer and teacher in North Carolina.  She was principal of the Union Symphony Orchestra in Monroe, NC for one season.  The USO was unique in that it was located quite outside the city, but the staff was persistent in bringing in an audience.  The orchestra has continued to grow since Cawley’s departure.  She was also a regular substitute for second bassoon and contrabassoon with the Winston-Salem Symphony, contrabassoon substitute for the Charlotte Symphony, and second bassoon substitute for the Greensboro Opera.

In the area of teaching, she worked at the Upbeat Music Company as their Private Bassoon Instructor.  She built a small studio in the Winston-Salem, NC area and taught private lessons on a regular basis.  Adding to her teaching experience, Cawley was the Teaching Assistant for the bassoon studio during her time at the University of North Carolina School of the Arts.  In this role, she was able to study with and work alongside Saxton Rose.  Cawley earned a Master of Music degree at UNCSA.  She also holds a Bachelor of Music degree from West Virginia University where she studied with Lynn Hileman.