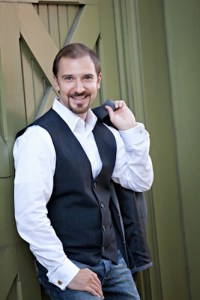 Mediterranean Opera Studio and Festival is pleased to welcome Eric Dubin as guest singer in its production of La Traviata performing the role of Giorgio Germont.  Maestro Dubin will also be working as a vocal instructor for the MOSF singers in residence for the intensive.

Eric Dubin has made many significant debuts in his young career earning the baritone critical acclaim. In 2013, Mr. Dubin appeared with Gotham Chamber Opera where he performed the title role of Rappaccini in La hija de Rappaccini in NYC and Los Angeles. The New York Post stated “Eric Dubin surged confidently to the top of his baritone range as the mad doctor.”

Of a summer 2009 performance as Enrico in Lucia di Lammermoor, Opera News said, “Eric Dubin’s impressive Enrico displayed an ardent, youthful baritone that nearly turned “Cruda, funesta smania” into a sympathetic moment for his character.” The Philadelphia Inquirer agreed stating, “The role of Enrico, Lucia’s coldhearted brother, was sung by baritone Eric Dubin, whose sonorous voice and authoritative presence were well-suited to the part.”

Recently, Mr. Dubin performed with Concert Opera Philadelphia as Renato in Un Ballo in Maschera. Last summer he performed with Gotham Chamber Opera in the Guggenheim Museum’s 50th Anniversary Concert in Venice, Italy and in May 2014 he appeared with the Philadelphia Orchestra in Strauss’ Salome as a Cappadocian and 2nd Nazarene.

After making his debut with Opera Philadelphia in 2008 in David DiChiera’s Cyrano, he has returned to sing the roles of Junius in Britten’s Rape of Lucretia, the Baron in Verdi’s La traviata, Morales and El Doncairo in Carmen, and covered the role of Lt. Gordon in Kevin Puts’ Pulitzer Prize-winning opera Silent Night.

Mr. Dubin has performed with Opera Cleveland as Silvio in I Pagliacci, Nashville Opera as Roucher and Fléville in Andrea Chénier and Schaunard in La Bohème, Dubuque Opera as the title role in Rigoletto, Fresno Grand Opera as Marullo in Rigoletto, the Allentown Symphony as Escamillo in Carmen, the Orange County Arts Conservatory as the title role in DiChiera’s Cyrano, Opera New Jersey as Enrico in Lucia di Lammermoor, Dandini in La Cenerentola, and Valentin in Faust. Of this performance, the Philadelphia Inquirer said: “Eric Dubin (Valentin) revealed hints of vocal start quality.”

Mr. Dubin graduated from The Academy of Vocal Arts, where he performed multiple leading roles including the title roles of Rigoletto and Eugene Onegin, Marcello in La Bohème, Belcore in L’Elisir d’Amore, Lescaut in Manon, David in L’Amico Fritz, Donner in Das Rheingold, Guglielmo in Le Villi, Remigio in La Navarraise and Ibn-Hakia in Tchaikovsky’s Iolanta. Mr. Dubin’s longtime voice teacher is the prestigious Carl Lawrenz of Chicago, IL.

Other performance credits include Nashville Opera’s gala “La Bella Notte”, Carl Orff’s Carmina Burana with the Cherry Hill Symphony and the Pennsylvania Ballet, Germont in La Traviata, Tonio in I Pagliacci, and Sgt. Finzi in Sondheim’s Passion. During his time in Philadelphia, he has performed with the Bermuda Symphony Orchestra and the Ocean City Pops summer concert series. He has also performed with Concert Operetta Theater of Philadelphia including a series of Nelson Eddy concerts, and is the recipient of the Nelson Eddy scholarship.

In 2006 he placed third at the regional Metropolitan Opera National Council Auditions, and third in the James Parkinson Opera Competition. He also won a study grant from the Liederkranz competition in 2006. He was one of five finalists in the 2007 Chester Ludgin Memorial Verdi Baritone Competition, hosted by Plácido Domingo.