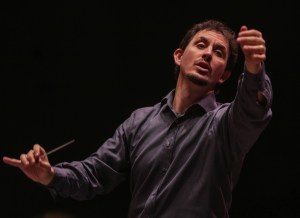 Educated in the rich musical tradition of The Santa Caecilia Conservatory in Rome as a conductor, composer, and pianist, Maestro Andrizzi, whose conducting has been praised as “admirable” by the Chicago Tribune and full of “spirit and thoughtfulness” by the San Diego Union Tribune, has become a versatile musician with a vast experience in the symphonic and operatic repertoires and a passion for the many areas of the musical arts.  As a conductor, he has worked with various symphonic and operatic companies and conducted, in the past several years, at the Lyric Opera of Chicago, San Diego Opera, Chicago Opera Theater, Opera Theater of St. Louis, Orchestra della Città di Ravenna, Cluj Symphony, and Chicago Philharmonic, among others. He has also collaborated with important music festivals, including the Millennium Park and the Ravinia Festivals. Many international artists, including Ferruccio Furlanetto, Frederica Von Stade, Frank Almond, James Pellerite, and Joyce Castle have performed as soloists with Maestro Andrizzi in concerts, operas, recitals, and recordings.

In addition to being a passionate conductor, Maestro Andrizzi is a dedicated educator. He has worked since 2013 as the Conductor and Head of the Orchestral Program at the prestigious Chicago College of Performing Arts at Roosevelt University, and, more recently, as the Music Director of the McHenry County Youth Orchestras. Maestro Andrizzi is very passionate about his work with young musicians and has often collaborated with international artist programs, including the Ryan Opera Center, La Musica Lirica, Chicago Summer Opera, and the Chicago Opera Theater Young Artist Program. In addition, he has guest conducted in various university music programs, such as at the Bienen School of Music at Northwestern University and DePaul University.

Previous positions include Music Director and Conductor of the Cervantes Orchestra of Chicago. He also served as assistant conductor of Andrew Davis (Lyric Opera of Chicago) and James Conlon (Los Angeles Opera).
Mo Andrizzi is a recipient of the Honorable Mention Award at the International Competition for Conductors of Contemporary Music “4X4 Prize” and a winner of the “P. Barrasso” International Competition for Chamber Music. He has recorded for Albany Records.

Born in Rome, Italy, Mo Andrizzi received a Diploma in piano performance from the A. Casella Conservatory, graduated in both conducting and composition at the Rome’s Santa Cecilia Conservatory, and earned a DMA in Conducting Performance at Northwestern University. After leaving his native country, he lived and worked in both Portugal and Spain, before moving to the Chicago area, where he currently resides with his wife and kids.