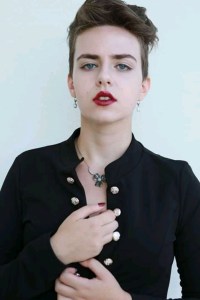 Elisabeta is a winner of many international voice competitions, including 2018 Grand Prix of Rising Stars European competition in Latvia. An avid recitalist, Lisa sung with the Concert Festival international tours in Portugal, France and Russia. She was a winner of Women in Opera The Friedrich and Virginia Schorr Memorial Award. She was also a recipient of a merit scholarship from the FAVA William Lewis Mozart Academy, where she appeared as Dritte Dame & Dritter Knabe in Die Zauberflote  in Salzburg, Austria. In the New England Conservatory Summer Opera Program, Elisabeta sung in the concert versions of ‘Carmen’, ‘L’Egisto’ and ‘West Side Story’. Lisa performed in Carnegie Hall five times winning early acclaim at International Music, Vocal and Concerto competitions. Her broad spectrum of a classical repertoire in six languages includes over 40 opera arias and art songs spanning the 16th through 21st centuries.
Elisabeta is in love with MOSF, its unique learning and performing opportunities, its phenomenally creative and inspirational environment, and the highest caliber of the finest world vocal faculty. She is beyond excited to be with MOSF again this coming summer!