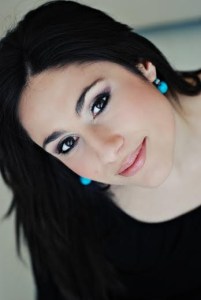 Elaine was born in Malta where she has completed her vocal studies under the guidance of soprano Miriam Cauchi at the Johann Strauss School of Music. She moved to London in 2014 where she furthered her vocal training with mezzosoprano Laura Sarti and vocal coach Marc Verter. Elaine is currently under the expert tutorage of internationally renowned soprano Nelly Miricioiu.

Elaine has participated in various masterclasses including those with Tamara Novicenko in Milan, Joy Mammen in Latvia, Sophie Daneman and Chris Cowell in London.  Whilst in Malta, Elaine had the opportunity to perform the role of Kate Pinkerton alongside Daniela Dessi as Cio Cio San in Madame Butterfly, La Contessa di Ceprano in Rigoletto and La Novizia in Suor Angelica.  Since moving to London she has taken part in various staged opera scenes including Ariadne (Ariadne auf Naxos), Pamina Die Zauberflöte, Susanna (Le nozze di Figaro), Elisetta (Il matrimonio segreto) at the Morley Opera School and soeur Blanche (Dialogues des carmélites) and Donna Elvira (Don Giovanni (Donna Elvira) at Associated Studios Performing Arts Academy. Elaine has also given a number of solo recitals with a variable repertoire including lieder and opera arias ranging from renaissance to romantic period.