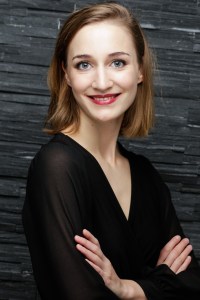 German mezzo-soprano Brigitta Ambs holds a Bachelor of Music in Solo Singing from the HfMDK Frankfurt am Main and is currently in her first year of Master studies at the Hochschule für Künste Bremen, under the tutelage of Prof. Kriztina Laki and Prof. Thomas Mohr. She has taken part in masterclasses with Kurt Widmer, Brigitte Fassbaender, Andreas Scholl, Renée Morloc and Helmut Deutsch. Brigitta is a recipient of scholarships from the DAAD and the Richard-Wagner-Verband.

This summer, Brigitta will be singing Cherubino in Le Nozze di Figaro and covering the role of Suzuki in Madama Butterfly with the Mediterranean Opera Studio and Festival. She is also an Academy scholar with the Rundfunkchor Berlin for the 2017/18 season.

As a concert singer Brigitta has already built up a large repertoire, including works by Mozart, Mendelssohn, Bach, Handel, Pergolesi, Rossini and Saint-Saens. She performs regularly throughout Germany, including solo appearances at music festivals such as the Weilburger Schlosskonzerte and the Kultursommer Rheinland-Pfalz, and at the Alte Oper Frankfurt, where she appeared as a soloist in Mendelssohn’s Elijah under the baton of Bertrand de Billy. In Summer 2017 the young singer made her first appearance at the Aschaffenburger Bachtagen and the Höri Musiktagen Bodensee.

Brigitta is particularly passionate about early music and has performed regularly at festivals such as the Weilburger Barockfest. In the 2017 summer semester she took part in the artistic education programme “BarockVokal”, where she had the opportunity of working with Emma Kirkby and Andreas Scholl.

Brigitta also has extensive experience as an ensemble singer. In January 2017 the versatile singer formed a vocal ensemble for a production of Handel’s Xerxes at the Oper Frankfurt. This vocal ensemble was subsequently engaged in June for a production of Mozart’s Betulia Liberata. Brigitta is also a member of the EuropaChorAkademie, with whom she performed at the Elbphilharmonie Hamburg, under the direction of Gustav Dudamel.

During her Bachelor studies, Brigitta gained her first experience on the opera stage. In the first year of her degree she sang in La Calisto at the Oper Frankfurt. Further roles include Mary in The Flying Dutchman (Burgfestspiele Bad Vilbel) and Hänsel in Hänsel and Gretel.