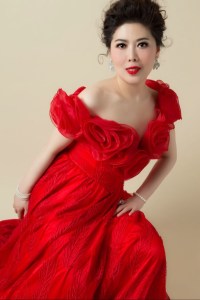 Studied at the Xinghai Conservatory of Music and on graduating sang as a soloist with the Shenzen Music Association, appearing in cities in South China as well as in Hong Kong and Macau. She then went to Italy to study on a training scheme attached to La Scala, Milan, for two years under the tutelage of Maria Luisa Cioni and Nicoletta Zanini. After she won a scholarship in the UK, She then moved to the Royal Northern College of Music, in Manchester, where she gained her MA and Postgraduate Diploma in solo performance with distinction, prior to this She obtained her Master of music from Royal Birmingham Conservatoire, In London she was a recipient of Trinity College London Scholar and studied Artist Diploma with Peter Knapp at Trinity Laban Conservatoire of Music and Dance.