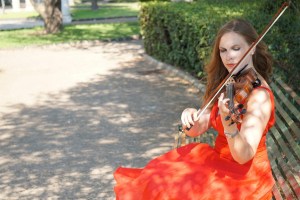 Scottish Alison Miller studied at the Royal Conservatoire of Scotland under the tutelage of Concert-Master of Scottish Opera Tony Moffat, soloist Andrea Gajic and Gina McCormack of the Maggini and Sorrell String Quartets. She graduated in 2013 with a First Class Honours in Violin Performance. She has participated in masterclasses with Harald Herzl, Greg Lawson, Ilya Gringolts, Leland Chen, The Brodsky String Quartet and Nicola Benedetti. Alison held principal positions in all the Conservatoire orchestras and was awarded the John McInulty Prize for Orchestral Playing in 2013. She participated in apprenticeships with the RSNO, BBCSSO and the Orchestra of Scottish Opera.

As a soloist, Alison has performed concerti by Bach, Mozart and Vivaldi in Scotland, Italy, Holland and Belgium. She has performed with the Amadeus Orchestra and appeared as Leader of the Aberdeen Marischal Chamber Orchestra, Scottish Sinfonia and the Edinburgh Bach Orchestra. Alison was recently appointed as an extra musician for the Orchestra of Scottish Ballet and Scottish Opera.

In 2016 Alison was Leader of the Mediterranean Opera Festival Orchestra during their tour of Sicily, performing Verdi’s “La Traviata” and Puccini’s “Gianni Schicchi” as well as appearing as a concerto soloist with the orchestra. She returned to Sicily in 2017 to play for the Concert-Master of the Teatro Massimo, Palermo. In the Summer of 2017, Alison toured the UK and Italy with Raucous Rossini, led performances of chamber music and contemporary opera (Helios Collective), performed at the Festival International Giovani Concertisti, Perugia and then worked with the New Generation Festival Orchestra, Florence in their debut production of Donizetti’s “L’elisir d’amore” in the Corsini Gardens She recently completed a tour of Canada and North America with TransAtlanticOpera.

Having previously worked for Sistema Scotland, Alison now holds the position of Associate Violin Teacher at the University of St. Andrews. Upcoming performances include her debut performance of the Saint-Saens Introduction & Rondo Capriccioso, recitals as Associate-Leader of the Argyll String Quartet and returning to co-lead the
Mediterranean Opera Studio Festival Orchestra in Summer 2018.