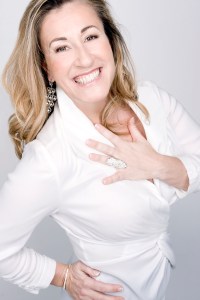 Lyne Fortin stands out with her impeccable vocal and stage technique and virtuosity, which allow her to multiply acrobatics with disconcerting ease. She is also known for the accuracy of her interpretations; very refined when she interprets Mozart’s elegant music, she displays all her vocal power and moves deeply in Verdi and Puccini. One of Canada’s greatest voices, soprano Lyne Fortin enjoys an exceptional career. Her art continues to grow; she was born Juliette and became Lady Macbeth; from Gilda she became Tosca, performing several leading roles in Canada and internationally. A renowned teacher, she generously passes on her extensive experience in master classes and to certain privileged professional singers. This prestigious artist has accumulated many successes and honours over the course of her career. She has won the Pavarotti International Singing Competition, a special prize at the CBC National Competition for Young Performers, the Pauline-Donalda Prize, the JeanLallemand Special Performance Prize at the OSM Competition, the First Prize and Grand Prize at the CIBC National Music Festival, a prize at the Quebec Music Competition, and a commemorative medal celebrating the 125th anniversary of Confederation in Canada. She has also received grants from the Canada Council for the Arts and the Ministère des Affaires culturelles du Québec, as well as the Raoul-Jobin prize from the Opéra de Québec. In addition, her alma mater, the Université Laval, awarded her two medals: the Raymond-Blais medal, to celebrate her immense success and extraordinary achievements, and the Gloire de l’Escolle medal, for her remarkable contribution to her profession and society. Her recordings are characterized by their remarkable quality and diversity. She has recorded the album Great Romantic Duets of French Opera (CBC Records) with tenor Richard Margison, a Christmas album entitled Noël with the Orchestre symphonique de Québec (Analekta) for which she won a Félix award at the ADISQ Gala, the Mozart arias recital Lyne Fortin Live with the Orchestre Métropolitain (Analekta), and Jardins d’Espagne, a recital on the theme of Spain (Analekta)